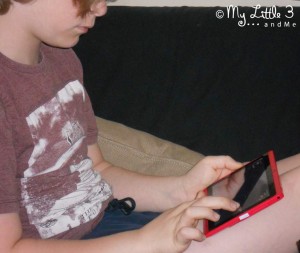 I love summer holiday time when the children are off school, the sun is shining (hopefully) and we get to go on lots of new adventures. It’s great having a bit more time and flexibility to travel further afield from home but I can’t say that either me or the children are particularly fond of traveling. Long journeys can be a bit dull after a while and although we have our stock of travel games to play and songs to sing they can lose their appeal after a while. My youngest son, Crumb, is also profoundly deaf and communication in the car is really exhausting for him as he struggles to hear and make sense of conversation against the sounds of the engine, wheels on the road and wind whistling by.

I always have a great big box of books in the car which the kiddies happily get stuck into which I’d never get rid of but over the last couple of weeks we’ve been trying out something new too which I think will be a great entertainment addition for long summer journeys. MoneySupermarket asked some bloggers to review a range of budget travel gadgets as part of a competition and we were lucky enough to receive an android tablet to review. It currently retails at less than £40 so it really is a budget model and I wasn’t at all sure what to expect for that kind of price! The children were so excited about trying it but I did warn them that it might not be very good compared to their Grandad’s iPad that they sometimes get to play with when we go and visit.

The budget tablet has been a really pleasant surprise. I didn’t think that at such a price it would be up to much to be honest but for what the children use a tablet for it’s proved to be great. It’s a good size for children’s hands, about the same as an iPad mini and I love that it’s a manageable size to throw in my handbag without any repacking needed (who has time to organize their handbag after all!) and it comes with a soft padded case as well, to protect it from knocks and bangs. 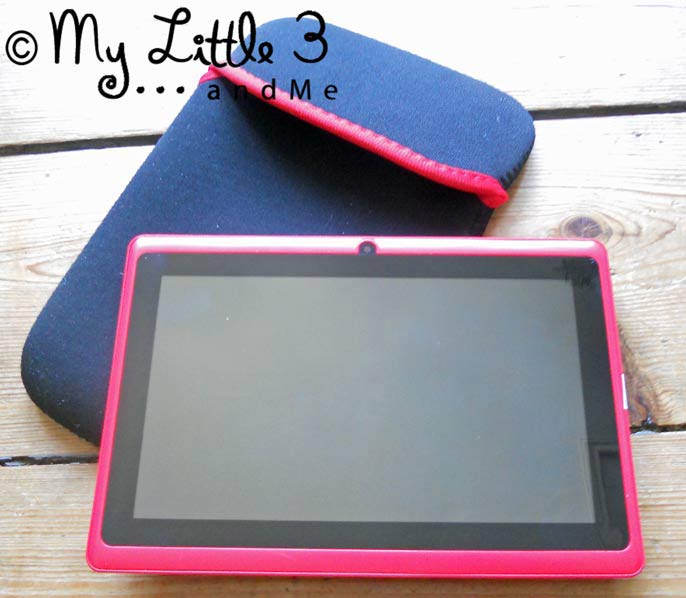 It’s been really easy to set up and connect it to our internet with step by step instructions on-screen, phew!  Once we were connected to the internet the children were desperate to see what games were available and I was expecting to have to fork out a bit of money to get some decent ones. We found lots of games that you could buy but we actually didn’t bother spending a penny as there were loads of free games available and the children have found lots that they seem to love. “Temple Run” and  “Hungry Shark Evolution” have proved to be very popular and once they were uploaded they didn’t need internet access so they’ve been great for travelling. 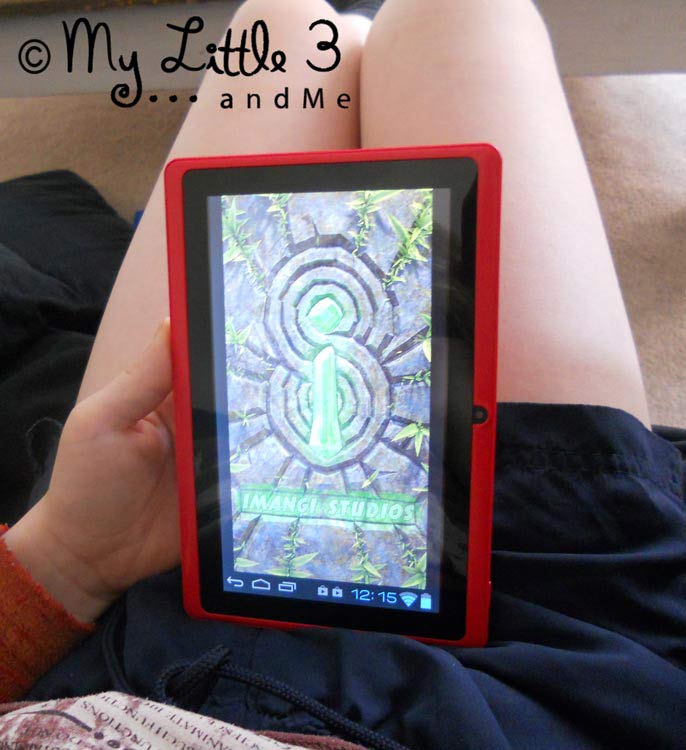 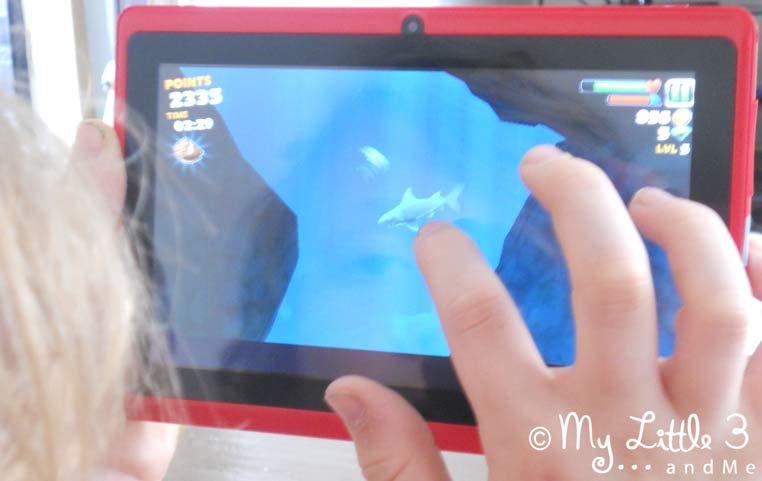 There are also loads of books that you can buy from the app store so the tablet could be used as an e-reader too. I’d never thought of getting an e-reader for the children before as I love the whole tactile nature of books but actually I think if I was travelling abroad and couldn’t take lots of books with me then the e-book option would be fantastic for both the children and me. 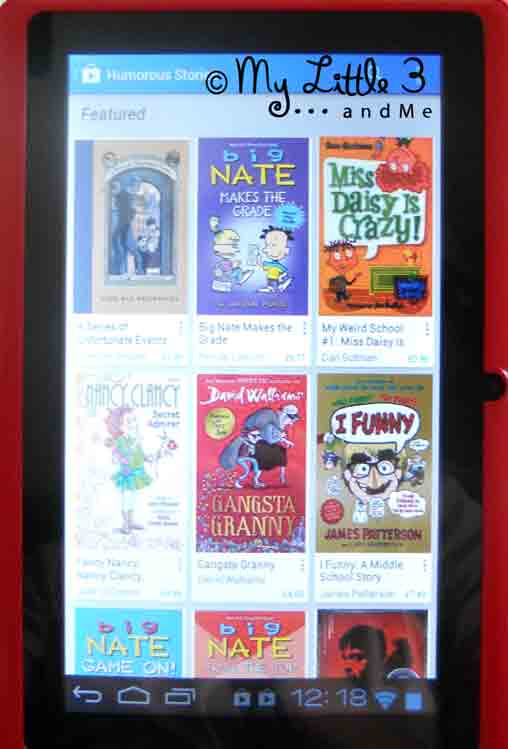 There are also films that can be paid for and again it’s something that I might consider for a long journey. We had a look at the trailer for Madagascar. The picture quality was fine but we did find the volume perhaps a tad quieter than we would like but then again we do have to play things fairly loud for Crumb to access, so the volume for people without a hearing loss may well be OK. 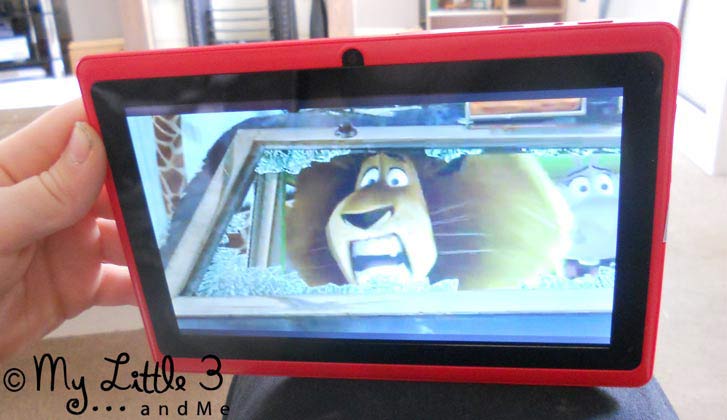 Overall we’ve been really impressed with it for its price. Admittedly it doesn’t feel as sleek and robust as an iPad but for its price what would you expect? It still seems robust enough to cope with heavy use and careless handling from the children though. I could never afford to get the children an iPad and certainly wouldn’t let it leave the house if I could. This tablet though I’d be happy to take anywhere without worrying too much about it. I’d take it in the car, to the beach, camping etc because if the worse comes to the worse and we lose it or break it then it’s not too much to replace.

The tablet is not much more to buy than one DS game so I think with the range of free games available this is great value and it doubles up as an e-reader, and movie player and I can access all my normal on-line things too. It’s been a really pleasant surprise and quite an eye opener! I do love the feel of an iPad so I’m not sure I’d recommend it for long-term adult use but I’d definitely use it for short periods such as on holiday and would definitely recommend it for children on the long-term.  My kiddies are obviously delighted by their new ‘toy’ and I’m sure it will get lots and lots of use, so big thanks to Money Supermarket.

Money Supermarket gave me payment to buy the tablet, all views are my own. 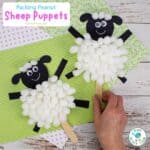 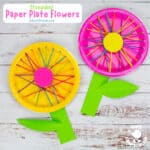 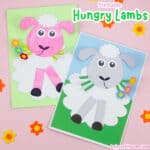 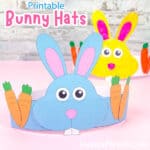