I love taking photographs of my children, I take hundreds and just store them on my computer. Gone are the days of getting them printed and keeping them in albums on the bookshelf; now most of mine are stored, shared and displayed digitally.  Until recently there’d often been a niggle in the back of my head about the need to back things up but I’d never done anything about it. I’d just trusted that my computer would look after them all. Well, a few weeks ago I was asked if I would like to try out the Seagate Backup Plus Portable Drive, so as the opportunity was knocking at my door and the niggle was shouting “Yes, yes, yes,” I thought I may as well give it a go.

I am not a particularly technically minded person and find new technologies a bit of a challenge. I think it’s the control freak in me, I like to feel that I have the steering wheel in my hands and know exactly how to turn it and when to, so I easily get frustrated when it comes to getting to know new phones or programming an unfamiliar DVD recorder. I knew that backing everything up was a job that needed doing but I can’t say that I was looking forward to tackling the whole affair at all!

It was then that disaster struck. My computer stopped! No warning, no hints, no “Oh I feel a bit poorly, you’d better get me to the Dr’s.”  No it just became very sick one morning and wouldn’t turn on or off properly, froze and squealed out high pitch and loud whirring noises for a few minutes and then just stopped, zero, nothing, zilch!

I really couldn’t believe it, the irony of having a backup drive winging its way to me whilst my computer was severely diseased was not lost on me and quite frankly made the whole fear of loosing all my precious photographic memories all the more painful. The ability to relax knowing everything had been backed up had been torn from me by just a few hours as the package arrived the very next day! Oh if only the postman had run!

I’d driven my computer to the repair shop for diagnosis straight away and as soon as the Seagate Backup Drive arrived I air ambulanced it to the repair centre incase the people in the know could save anything to it. And then I waited….

I paced, I groaned, I phoned repeatedly for news, and tormented myself counting up the hundreds of memories of days out, birthdays, Christmases and the such like that might be lost all down to my reluctance to have to tackle something new and techy. Grrrr, cross with myself is an understatement.

Five, yes five, long weeks later, (The store lost my paperwork twice, but that’s another story!) I got the phone call; the terrible news…
“Ms Smith I’m sorry to tell you that your computer has died…we did all we could.”
Ok they used techy terms but the gist of the matter was my computer was completely dead, beyond repair. The list of things that had gone wrong with a computer less than two years old was quite remarkable!  Ok, ok, I’m sad, yes, but the data, tell me about the data????
“Ms Smith, we’re pleased to tell you that we have been able to do a full data recovery onto your Seagate Backup Drive.”
Wahoo, hip, hip hooray, I let out the huge breath I’d been holding for over a month. Thank goodness!

We are now a week or so on and my old computer has been laid to rest and I am now sat preparing this review on my sparkly new computer.  At my side is the Seagate Backup Plus with all my precious photos.  It was with great apprehension that I plugged the Seagate in to check that everything was really stored there and lo and behold there it all was, with easy to navigate menus to find everything I wanted. Amazing! 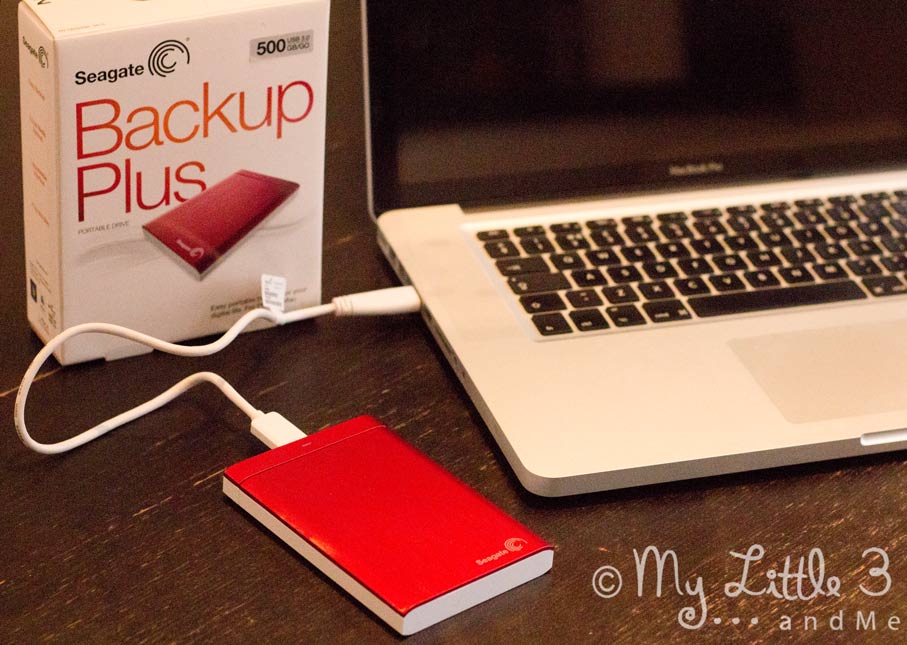 I’ve actually decided to keep all of my old data on that Seagate Backup Drive rather than transferring it all to the new computer and using up a large chunk of its memory. I know it’s all safe where it is and I can easily access things whenever I want them. I’ve actually bought another Seagate Backup Drive for this computer and I will be backing up regularly. The device is so, so easy to use it really is a case of attaching it to the computer and then it step by steps you through the process. I wish I’d done it a long time ago and I would have saved myself an immense amount of angst.

A friend suggested to me that I buy some online backup space instead but I just don’t like the idea of that as much. Call me daft but it feels safer and I feel more in control with it sitting there in front of me rather than off in space somewhere. One thing another friend told me though that might be worth bearing in mind, is that if you leave your backup drive next to your computer and your computer gets stolen, then the chances are the thieves will grab the back up drive too! Arrghhhh maybe I should be backing up my back up?

For me that’s a dilemma for another day, for now I can relax knowing that my precious photos, files and folders are all safely tucked away should the worst come knocking on my door again and I am left relieved and smiling but not forgetting what a silly I was for not tackling the backup issue sooner. Thanks Seagate for making it such a breeze!